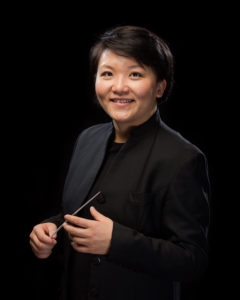 A prizewinner of the prestigious International Malko Conducting Competition, Tong Chen has quickly established herself as one of the most promising and exciting young conductors in her generation.

In 2015, Tong made her Lincoln Center debut at David H. Koch Theater with the Paul Taylor Dance Company and Orchestra of St. Luke’s.This season’s highlights include her debut with the New Jersey Symphony Orchestra; a return to Los Angeles Philharmonic working with Gustavo Dudamel and assisting Iván Fisher with Budapest Festival Orchestra at Hollywood Bowl. This season marks her fifth anniversary as music director of the Yonkers Philharmonic Orchestra. Chen is based in New York City. 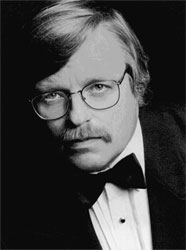 James Sadewhite was born in Yonkers in 1946. His parents moved to Valhalla New York where he attended the Valhalla Schools. As a high-school student he studied the clarinet with Jerome (Gino) Sala, played in the Mount Vernon Philharmonic, The Westchester Pops Band, and the Westchester Youth Symphony where he studied conducting with Norman Leyden.

Mr. Sadewhite attended the State University at Potsdam New York, where he earned a Bachelors Degree in Education, a Performance Degree on the clarinet and was selected to play in the annual Concerto Program. While in college he studied conducting with James DePriest of the Oregon Symphony Orchestra and the harpsichord. Upon graduation, he was employed bt the Bay Shore Public Schools and taught there for two years, playing performances on the clarinet around Long Island.

He then started a teaching job at the Dobbs Ferry Public Schools, where he taught instrumental and vocal music at all levels for the next thirty four years. He retired from teaching in 2002. Meanwhile, he earned two masters degrees from Columbia University with a major in conducting and was appointed Conductor and Music Director of the YMHA Orchestra in Livingston, New Jersey. Since then, he has been conductor of the Irvington New Jersey Symphony, The Summit New Jersey Symphony, The State Repertory Opera, New Jersey, The Manhattan School of Music Pre-College Philharmonic, the Chappaqua Chamber Orchestra, New York, the New Jersey State Opera, and of course the Yonkers Philharmonic Orchestra. He has received critical acclaim in the metropolitan area, especially for his performances of Massanet’s Thais, Bizet’s Carmen, and Gounod’s Faust as well as performances by the Chappaqua Chamber Orchestra with Ruth Laredo, Chu Yun and Peter Winograd and the Summit Symphony with Pamela Frank Norman Kreiger and Jane Brunnell.

He has appeared as guest conductor numerous times in the metropolitan area and in Taiwan, most recently as the conductor of the Westchester County Area All-State at Purchase.

He was married in 1972, and he and his lovely and talented wife Elizabeth (Betsy) live in Irvington, New York. Their two grown children, Alec and Margaret, live in Oakland California.

Dr. Kathleen Pistone Carucci, a native of Yonkers, has the distinction of being the founder of the Fine Arts Orchestral Society. She has dedicated a lifetime to the promotion of the arts. Her vision, commitment and leadership has enriched Yonkers and its surrounding communities. She was married to the late Pat Pistone who was the founder of the Yonkers Philharmonic Orchestra. Together they co-founded and funded the first few years of the newly formed Orchestra, until its official recognition.

As a professional, Dr. Carucci was employed by the Yonkers Public School District. She was Director of Staff Development and a member of the Superintendent’s Cabinet. As Director of Performing Arts she was responsible for re-instituting the All-City Band and Choir.

Dr. Kay earned her Master’s degree in psychology at Manhattan College and her Ph.D. from Yeshiva University. She also completed a Spiritual Development program in Westchester, trained in Bereavement at the Archdiocese of New York and was affiliated with the Thanatology Department of Columbia Presbyterian Hospital in New York. In addition to being a Bereavement Specialist, she is also a Pastoral Counselor.

During the early 1970’s Mayor Alfred DelBello appointed Kay to coordinate music and art festivals throughout Yonkers and later served as Trustee for the Department of Parks. She then volunteered with Mayor Martinelli as chairperson of “Square Under the Stars” and was responsible for organizing musical programs in order to regenerate an interest in downtown Yonkers. She also initiated and organized the highly successful outdoor concerts at the Yonkers Cross County Shopping Center.

As Chairperson of the Mayor’s Community Relations Committee, Dr. Carucci was involved in the re-institution of the “Christmas Tree Lighting” a popular Yonkers tradition. She also worked closely with Senator Flynn in presenting concerts at the Hudson River Museum and Marina. May 15, 1987 was declared “Kathleen Pistone Day” by the Mayor and City Council of Yonkers.

Dr. Carucci was chairperson of the Enrico Fermi Scholarship Breakfast, initiated the Fine Arts “Pistone Musical Scholarship Award” (now expanded into the Concerto Competition), was a member of the Columbus Day Committee, and inducted into Westchester County Senior Hall of Fame. She has been recognized by many organizations including the Council of PTAs, the American Committee on Italian Migration, and the East Yonkers Rotary Club. Currently she is a member of the Fine Arts Orchestral Society of Yonkers Board of Directors and President of the Building Hope for the New Yonkers Animal Shelter.

Dr. Kay was on the Sacred Heart Church Advisory Council and Chairperson of Leadership Training Program for (YEFI) Senior Citizens in Yonkers and a Board member of the Beczak Environmental Educational Center.

She was married to Anthony Carucci who died suddenly in 2004. They volunteered as a team on many projects. She is the proud step grandparent of Luke and Molly Stazzone. Dr. Carucci is still actively involved in our community and takes pride in being a “Professional Volunteer”.