In 1962 the late Pasquale A. Pistone founded the Yonkers Philharmonic Orchestra with the encouragement and enthusiasm of members of the former Yonkers Symphony Orchestra, which Maestro Pistone had conducted for the previous two years.  After incorporating, the orchestra received financial support from Local 38 of the American Federation of Musicians. In 1962, Dr. Kathleen A. Pistone founded Fine Arts Orchestral Society (FAOS). The founder, the musicians, their families, and a small nucleus of charter members kept the music playing by raising funds through a variety of social events. Since the orchestra did not have rehearsal facilities Msgr. Novajovsky of the Most Holy Trinity R.C. Church, a musician himself, graciously offered the orchestra to rehearse and perform in the church hall.

Maestro Jerome Sala was named conductor and music director of the orchestra in 1972. He was honored in Yonkers’ City Hall. He remained in this position until his death in 2001. In 1987, under the aegis of Mr. Sala, members of the orchestra initiated a special program in collaboration with the Yonkers Public schools. Musicians from the orchestra became mentors for students in the Enrico Fermi School for Performing Arts and Emerson Middle School. They encouraged student participation in the study of music. The program was temporarily discontinued when FAOS could no longer fund it, but has been reinstated with the help of ArtsWestchester and other sponsors.
FAOS leads the way in providing free live symphonic concerts to residents of Yonkers, and its surrounding communities. The Yonkers Philharmonic Orchestra presents four free concerts each year at Saunders High School.  For more than fifteen years, audiences enjoyed a free outdoor summer concert 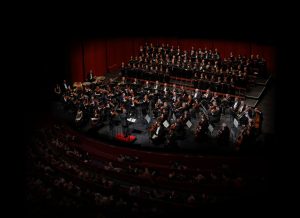 In the fall of 2002, the Yonkers Philharmonic Orchestra was featured at the gala celebration of the opening of the building housing the Riverfront branch of the Yonkers Public Library and the Yonkers Board of Education. FAOS recognizes, and encourages young talented musicians. When Pasquale A. Pistone died in 1971, Dr. Kathleen Pistone Carucci gave scholarships in his memory to promising high school musicians in the Yonkers schools. This grew into our current Concerto Competition, now in its 38th year, in which talented high-school music students who live or study music in Westchester County are offered the opportunity to compete for scholarships. Each year since the mid 1980’s, the five winners perform as soloists with the orchestra in a special concert “Concerto Time at the Philharmonic.”

Other information about us: